Focus on Polyethylene Film for 30 Years

As the name suggests, net replacement film replaces the need to use net wrap in holding the round bale formation, and instead applies several layers of solid film around the circumference of the bale. Net replacement film effectively also acts as an ‘underlayer film’, which gives further support and strength to the outer wrapping films.

Designed for the new generation combination baler – wrapper, Sterling-young is an excellent net replacement film. It is an innovative 5-layer co-extruded pre-orientated film and specifically suit the newer generation combination round baler machines, or combo baler wrappers such as McHale, Vicon, Krone and Claas.  In combination with high-quality silage wrap, highly compressed bales of precisely cylindrical shape can be produced while optimally retaining the energy and nutrient content of forage. 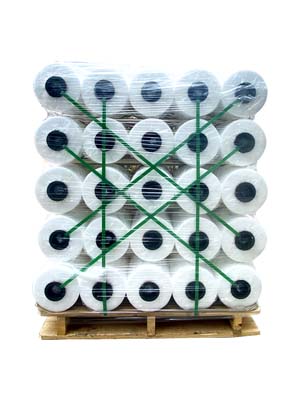 1.  Covers the full width of the bale from edge to edge.

2.  No need to separate Film & Net when opening bales

4.  No danger to animals from net residue sticking to feed

6.  100% recyclable – can be recycled together with Silage Film.

Reduced material usage is one of our focuses when it comes to product development, also in net replacement film. Net replacement film is typically thinner than your conventional non-filmed net. In 2020 our 17µ products will be fully replaced by an all-new 16µ product range with more meters per reel, which will give contractors and farmers an even greater output.

Your browser version is too low to display the page normally. It is recommended to upgrade to Microsoft Edge and enter the official Microsoft download Microsoft Edge